This season stirs the rain, reminding that the wet’s fury will soon be gone, prodded along by winds that hurry to find their break. It is the beginning of a season of festivals and will continue across months until it culminates in fireworks marking the turn of another season. There are festivities across the length and breadth of the country, all accompanied by flowers and foods of the season, offerings and benedictions, passed on from generation to generation. Some homes ring with peals of tradition while others bristle against it. 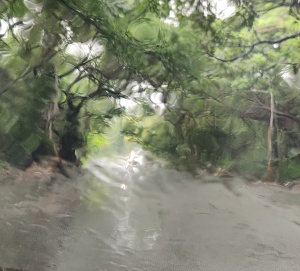 This season stirs more than rain, it whips up memories of a mute month by the sea. The grey skies blur into grey waters or is it the other way around? Perhaps, it is best not to find out. The ambiguity is better, a blending into rather than a separation. The seas are rough, their dance too wild for domesticated festivities. It is the season of storms and the sea has to spend herself, so she whips herself into a frothing that will die multiple deaths on the sand. Her churn is restless and sometimes you can hear her wails that beckon you to walk unarmed into her reckless bruising. Some have been known to succumb to her beguiling calls. Maybe beneath the undulating unrest, there is silence, comfort and stillness like in the womb. 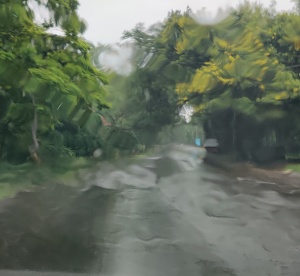 This season stirs torrents, banks that overflow and floods that lay stake to the right to devour- in the sky, on the ground. It also feeds, a lush feeding of greens that are goaded into awakenings. Shraavan’s rain is the mother of all things that birth in the soil but a capricious one that will leave her offspring to the vagaries of the next seasons. The price for making a verdant world- lives demanded through uncontrollable waters or claimed by millions of invisible fevers festered in winds. It is just the way of the seasons, always has been.

Birth, Growth or Death. Awake, Dreaming or Sleep. Morning, Night or twilight. Earth, Heavens or the nether worlds. In threes. The trinity of creation, sustenance and destruction. A three sided coin that is the currency of existence.

3 thoughts on “This Season”