Infants live mostly in a world of smell and taste, primarily of the breast. Adults though have different needs, to be heard, seen, and sometimes touched. I’ve found that the older I get, it’s more about being heard. Shabda after all is the subtlest of the lot and first to manifest in life.

Many of my connections in the last few years have spilled from the virtual world into the real. Some have stayed, some have fallen away just like those made solely in the real world. I’ve also been lucky to have had some internet acquaintances grow into friends but mostly, its been a comfortable space to fulfill a need to express.

Yesterday, I had a stranger come over and spent a couple of hours in conversation, content to listen. Now, I’ve never spoken to S before and it was just a couple of days before that we chatted briefly on twitter. It didn’t take long for S to stop by and give a whole bunch of books, a stash of 27, all of which I haven’t read (finished one today though :). I’ve got so many unread books now across three separate book shelves and the kindle that I don’t need any until perhaps the end of the year! It also necessitated a visit to the library to pause my membership there temporarily until I get through the current lot. 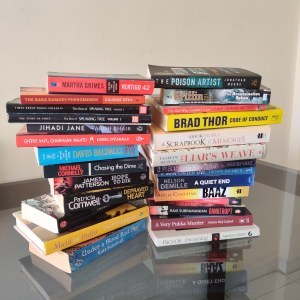 Anyway, back to strangers visiting my home, I’ve had quite a few friends/acquaintances of friends who have visited and also stayed over. It is quite enjoyable to listen to their stories and get a glimpse into what they choose to share. Sometimes, I like to know more but mostly it is about being present and witnessing a person rather than anything else. It is an honour to be able to receive people’s words and partake of them. Sometimes, they become fodder for my ruminations. Like something S said, ‘The internet is full of lonely people‘. It became part of a letter to another blogger friend. Words, they have a life of their own.

My new place has slowly grown into the old open home I used to live in. It’s nice to have friends and strangers come and break bread once again. At best, I could describe the niceness as a sense of contentment at people feeling welcome and at ease, enough to want to stay. It makes me think of a time, a few decades ago when travellers would be guests in unknown homes. After all we do belong to a place that reveres the athithi as a God.