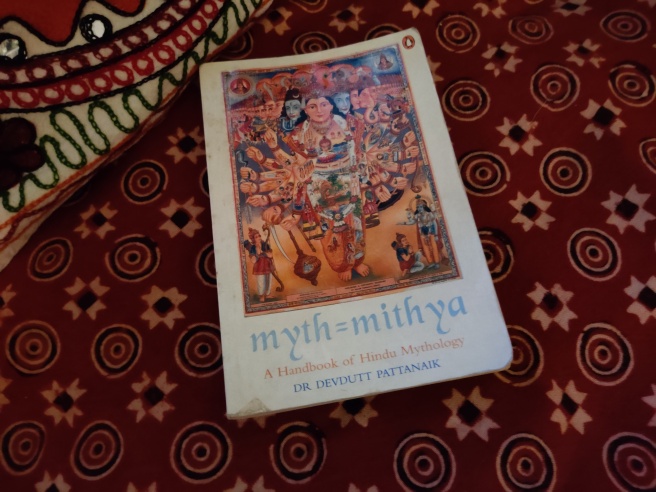 One of the earliest mythology books I bought was Myth = Mithya by Devdutt Pattnaik. Since then, I’ve wandered into Indian philosophy and her old sciences by various authors, Indian and foreign. Those old sciences and arts still exist although what we get is the pop packaged version. It is rare to find authentic practitioners amidst the din of the internet. For an inert screen, computers and phones do make a lot of noise.

The daughter had run out of books to read and I thought it might be interesting for her to get a taste of the fantastic world of Indian mythology. She took the book and in true bibliophile style, smelled the pages. I took the book to smell too and was washed not just in the fragrance of an old book but the milestones in its age.

It lived longest in an old sheesham bookcase which also housed incense sticks from various parts of the country. Some were bought on travels, others gifted by friends. Every time I opened that cupboard, there would be a whiff of wood and smoke and it always reminded me of an old ancestral home that no longer exists. That house was deep in the hills, snug at the bottom of a green jungle, all stone and wood. I remember all too few weeks with my aunt listening to stories and watching the fireflies flit until we fell asleep. Life was simple in that way. Mornings began with the smell of black coffee and the kitchen would cough up food and smoke through the day until the embers were silenced at night. There was time for stories and aimless wandering, games in the open and books.

The sheesham bookcase was abandoned but some of the books made it through the various pages of my story. Stained, yellowed and with the binding showing signs of disintegration, these old books are uncannily similar to human lives. Fresh off the press, they are sharp and crisp and as they come in contact with hands and eyes, they start to lose some of those edges and become softer, beaten and develop age spots. Hidden between their pages, you discover old notes and cards, like the one I found in this book. It was from a colleague many years ago as she was moving on to a different role.

The past never leaves us, it circles around our present and comes up for air every now and then. Like a friend once said, we live our lives in the orbits of other people.

“Trees fall with spectacular crashes. But planting is silent and growth is invisible.”

I read these beautiful lines in one of the stories from The Overstory.

Trees have been my friends for a while now. My first memory of them is of a grand old Eucalyptus tree outside a church in the middle East. It was part of a cluster that provided shade under which I discovered books. A few years later, I would be lost in a grove of mango trees as a rebellious teen. Much later, I’d make friends with them on early morning runs. A few years ago, I started listening to their seasons from my balcony and now I touch their gruff trunks when I encounter their unhurried life as I rush through the days.

I’m lucky to live in a city that still has a fairly large green cover. My living space has plants that have wrapped themselves to the changed shape of my life. Living, adapting, growing and providing space to other lives. Perhaps, the munia’s nest in one of the pots will have little eggs in them by the time I return home. Gardening, planting and being one with the soil is deeply healing. It invites birdsong and flowers, fruits and music. Trees can make philosophers of anyone who stops to listen.

This book cropped up in many places and I finally got myself a copy on the Kindle. While I want to drink all of it at one go, the stories themselves are so like trees that I am reluctant to rush the reading. The prose reads like poetry and the stories are an intersection of the past, present and future. I was hooked from the very first couple of sentences. Pick it up if you haven’t already.

The year was 1969 or thereabouts. 50 years ago, India would still have been very young in her freedom and quite poor but the handcrafted aspect of her everyday was rich, a living, breathing continuum of history, full of colour and flavour. A tiny part of that piece of culture wound up in a country far away marking time.

A New Yorker visited India as her friend was from this exotic land of colour and chaos. Perhaps her only visit and she might have been enamoured by the colourful sarees she saw on the women around her, enough to splurge on a few herself. Soft silk with exquisite zari work, thread work and unusual motifs, they lived half a century in the wings before winding their way to me.

I wish I knew more about that lady, her impressions and thoughts about my country as it was then. Travel in that era would not have been like it is today with app based cabs and airbnb. It would have been fraught with logistical nightmares and culture shock. I am curious to know about her relationship with M, the Indian lady who was her friend. Which part of the country was M from? What nostalgia did she bear for her country that kindled a desire in her friend? What were the seasons of their friendship and how did their lives play out?

I don’t know any of the answers and the questions still bubble over as I run my fingers over 50 year old silks in extremely good condition. Part of me wants to know and the other part is happy imagining their lives and flavouring it the way I choose. All of life is really a series of choices, moment to moment anyway and a different choice at any point could result in a different unfolding.

These sarees found their way to me via a pretty circuitous route. I opened the package yesterday and they shimmered in all their silken glory. The choice of colours would have made it just the right range for an exotic garment of an infrequent saree wearer. I wonder how many times M’s friend would have worn it and the way she might have played with it.

M’s friend would have been quite the hippie and might have worn the saree out and about in NY. I imagine a happy woman with a full throated laugh who would own a drape and make it her own. In my head, I have an image of Audrey Hepburn like elegance. These were a part of her life’s possessions and her daughter kindly offered them to me, a stranger on the internet. And just like that six yards of silk stretched across time and space to connect the lives of 4 women and an unknown number of hands who wrote poetry on silk. 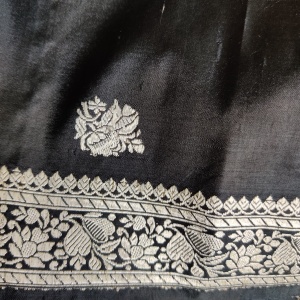 Social media often gets a bad rap but it’s brought me real people and their stories, some from many miles away. Often, homes are opened and strangers like me have been privileged to break bread. And sometimes, they take the shape of stories, like this one about vintage sarees that unfolded thanks to a fellow blogger’s generosity. Thank you Caitlin for sharing a piece of personal history with a stranger.

Update:  The New Yorker in the story- that’s Caitlin’s mother Cynthia and Molly Tharyan’s friend. Cynthia wore these sarees around Toronto causing quite the scandal amongst the sedate moms in their understated and elegant pearls and cashmeres. She would have been an exotic adventurer considering she did a trip to India in a cervical collar after an ill fated dive into a swimming pool. The silks are so vibrant and full of life, colours of throaty laughter and uninhibited expression.

Half a century later, Molly has passed on, her sister and daughter lost to distance and time. Estrangement at many levels. Some wild art of me wants to see a story unfold here, it’s just a romantic’s dream. Maybe Molly Tharyan’s daughter and sister stumble upon this post via an unknown reader and connect with Caitlin. I’m not sure if that’s desirable or not but it makes for an afternoon’s worth of story making.